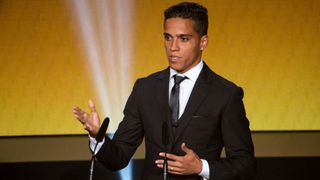 Just months after beating the likes of Lionel Messi and Carlos Tevez to the Puskas Award, Wendell Lira has quit football to become a gamer.

The Brazilian scored just six times in an injury-plagued professional career, but his acrobatic strike for Goianesia against Atletico-GO in 2015 was named as FIFA's goal of the year at the Ballon d'Or gala in January.

After leaving Vila Nova in May, Wendell has opted to retire from the sport in order to pursue a second "dream" career - by linking up with a YouTube channel as a gamer in the lucrative esports industry.

"I define my life in two dreams - one possible and another almost impossible," the 27-year-old told Globo Esporte.

"One was to be a player and have achievements, which is difficult because, in Brazilian football, it is difficult to become professional.

"In fact, 95 per cent of football players from Brazil have difficulties. I lived 15 years in football, and had good times and bad.

"I had pleasant moments I'll never forget. I played alongside big stars too. I had pleasure being a guy who was actually accomplished at football.

"And I had the dream of being a gamer, I always had this desire to live it.

"It is almost impossible to stop playing football to live as a gamer, but God gave me this opportunity.

"It is not the end of a dream. In fact, God has given me the opportunity to have this job as a follow-up in my life, being happy and continuing with that smile."