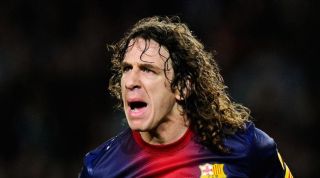 The former Barca captain follows director of football Andoni Zubizarreta out of the door at Camp Nou – the latter sacked on Monday after four years in the position.

Puyol was appointed in May 2014 after calling time on his playing career due to persistent knee problems hampering his time on the pitch.

And he has now ended his 20-year association with the 22-time La Liga champions, though the 36-year-old did hint a return to the club he joined two decades ago.

"I want to announce that I have decided to terminate my employment relationship with the Football Club Barcelona," he said in a statement released on his official Facebook page.

"These three and a half months have given me the opportunity to see the other side of the club. I have learned so much, I am very grateful, and now, I would like to experience other things from a different perspective and from other places.

"I want to grow both personally and professionally so that, in the future, I wish to return to this club and give back everything that you have given me during these unforgettable years.

"I am enormously grateful to employees, managers, president for the trust and helping me in this transition that was not easy to me.

"And above all, to the fans, [to whom], since my retirement, I feel close, much more still.

"I would have liked to be able to leave with my boots on, but life is not always as one wants."