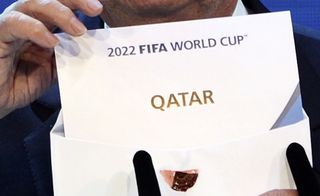 Concerns over the Arab state's human rights record have led to questions over its suitability to stage the showpiece event, while FIFA are also giving strong consideration to rescheduling the tournament from its traditional June-July time slot, owing to Qatar's searing summer heat.

Here we take a look at the timeline of events that have made the 22nd edition of the world-famous competition arguably the most controversial, and it is still eight years away...

March 2009: Sheikh Mohammed bin Hamad bin Khalifa Al-Thani, son of the Emir of Qatar, announces that he will lead Qatar's bid committee for the 2022 World Cup.

September 2010: A FIFA inspection committee visits Qatar to assess its merits as a host nation.

December 2010: World football's governing body reveal in a ceremony in Zurich, Switzerland, that Qatar has won the right to stage the 22nd World Cup, taking 14 of 22 votes in the fourth round, while the United States claims eight.

January 2011: FIFA president Sepp Blatter, speaking in the Qatari capital Doha ahead of the Asian Cup, says that he expects the tournament "will be held in winter".

February 2011: Blatter hints at a form of collusion between the Spain-Portugal 2018 bid and that of Qatar, saying: "I'll be honest, there was a bundle of votes between Spain and Qatar". An earlier FIFA investigation had already cleared both parties.

May 2011: Allegations of corruption continue to blight the entire bidding process for both the 2022 and 2018 tournaments. A whistleblower, who is later revealed to be Phaedra Almajid, formerly part of the Qatari bid, claims that money was paid to FIFA's Executive Committee in order to buy votes.

July 2011: Almajid retracts her claims of corruption and insists that she wanted to exact revenge after losing her campaign job.

December 2012: Hassan al-Thawadi, the secretary general of the Qatar 2022 supreme committee, insists staging the tournament in summer is feasible, adding that a huge investment in infrastructure will create super-cooled stadia to protect fans and players against the heat.

September 2013: UEFA's 54 member associations back plans to move the tournament from its traditional June and July slot.

November 2013: Anti-racism campaigner Piara Powar calls on FIFA to push the host nation to change its laws on homosexuality. It is illegal to engage in homosexual acts in Qatar.

January 2014: FIFA secretary general Jerome Valcke says in a radio interview that the World Cup will not take place in June-July, but the world governing body insists that a decision is yet to be made.