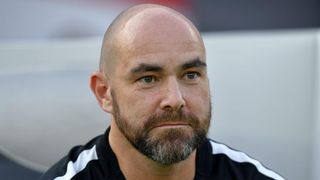 The two sides dumped out perennial contenders South Korea and Australia respectively in the quarter-finals to boost hopes of claiming a maiden title in 2019.

Japan will play the winners of Tuesday's last-four clash and, having made it this far, the two coaches are now not interested in playing down expectations.

Sanchez feels Qatar have been under pressure throughout the tournament as they build towards hosting the 2022 World Cup, but he has been delighted with the way his side have thrived in the circumstances.

"I think that one of the key reasons for us reaching this stage of the competition is that the players have been aware of the pressure," Sanchez said.

"In any competition, you have pressure as you need to get the right results. The team, I believe, has coped very well with the situation so far. Of course, all of us know there is added pressure because it is the semi-final.

"But I think we are feeling confident rather than under pressure ahead of the match. It is a very big game for us and we are very pleased to be in the semi-finals of this very important tournament.

"Hopefully, against UAE, we are going to play to our strengths and try to do our very best to continue in the competition."

Meanwhile, Zaccheroni believes hosts UAE are growing into the tournament, saying: "We had some difficulties in the first group stage games, as well as in the round of 16.

"But we are evolving and our performance in the last game [against Australia] was very good. I am therefore confident that we will be able to beat Qatar with a good performance."

Free-scoring forward Almoez Ali has slowed since firing seven group-stage goals, failing to find the net so far in the knockout round. However, if Qatar are to win the tournament, he will surely have to deliver again.

The UAE's equivalent marksman is Ali Mabkhout and, by contrast, he has two in his last two matches. After a winner against Australia, he will be targeting another famous strike on Tuesday.

– This will be the fifth Asian Cup meeting between Qatar and UAE, with their other four encounters coming in the group stage – UAE losing the first two contests and winning the last two, including a victory in 2015.
– Qatar have never beaten the hosts in an Asian Cup tournament (D1 L2), drawing 1-1 against Vietnam in 2007, losing 1-0 to China in 2004 and 4-0 to Kuwait in 1980.
– The Asian Cup has seen hosts qualify for the semi-finals in successive tournaments (Australia 2015 and UAE 2019) for the first time since 1992 (Japan) and 1996, when UAE hosted the tournament and got to the final.
– Qatar have reached the semi-finals of the Asian Cup for the very first time, having been knocked out at the quarter-final stage in both 2000 and 2011.
– After scoring seven goals, having seven shots on target and 10 shots in total in the 2019 Asian Cup group stage, Qatar's Almoez Ali has recorded just three shots with one of them on target and failing to score in the two knockout stage matches.
– UAE's Ali Mabkhout has scored nine goals in Asian Cup tournaments; only Iran's Ali Daei (14) and South Korea's Lee Dong-gook (10) have scored more in the competition's history.