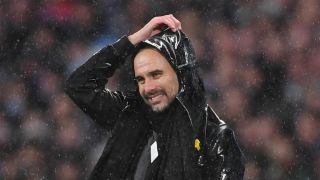 Manchester City do not have the money to effectively compete for trophies on four fronts, according to manager Pep Guardiola.

Runaway Premier League leaders City travel to Cardiff City in the fourth round of the FA Cup on Sunday, where victory would ramp up talk of an improbable quadruple, given Guardiola's men are into the final of the EFL Cup and have landed a favourable Champions League last-16 tie against Basel.

City are reportedly on the verge of breaking their transfer record by meeting Aymeric Laporte's €65million (£57m) release clause at Athletic Bilbao and the centre-back's arrival would take Guardiola's spending on first-team players above £400m since his arrival at the Etihad Stadium in 2016.

Nevertheless, the 47-year-old believes the current trend of spiralling prices for top-class players means compiling a squad with high-quality depth throughout is an impossible task.

"If you are in four competitions, fighting to be there, sometimes you have to be lucky in terms of injuries or you have 22 top players to compete in all competitions," Guardiola told reporters.

"Today, to have 22 players you need – people maybe don't believe me – the money we don't have.

Given City's lavish spending throughout the Sheikh Mansour era, they are remarks that could well draw ridicule for Guardiola, although also ones he was seemingly keen to make as they came in response to a question about Vincent Kompany's injury struggles.

Manchester United boss Jose Mourinho and Chelsea's Antonio Conte have both spoken of being unable to compete with City's financial might over recent weeks, with the Premier League title race threatening to become a procession.

This week, after United secured the signing of long-time Guardiola target Alexis Sanchez from Arsenal, Mourinho disputed the widely reported version of events that the Chile forward's increased wage demands forced City to leave the negotiating table, clearing a route to Old Trafford.

Such is the guarded nature of a feud that once fizzed and crackled publicly when the pair were in charge of Real Madrid and Barcelona, Mourinho's claims that finances were not a factor in Sanchez plumping for United came via an obscure metaphor about an orange tree.

They were apparently pointed enough that Guardiola felt the need to respond, alluding to City's obligations under UEFA's Financial Fair Play rules when it came to their transfer budgets and noting his club's current record buy - £55million to bring in Kevin De Bruyne from Wolfsburg in 2015 – fell below some of the more eye-watering fees spent in recent windows.

"We do not know in the future what is going to happen but we didn't pay more than 100 million, 90 million or 80 million for one player.

"We cannot pay that right now. They [City's board] told me. In the salaries, some budgets we cannot pay.

"That is the truth. And to be in four competitions, when you don't have recoveries and have to play every three days, you need 22 top players. With what you have to pay today, it is impossible to have that."

Guardiola added: "Of course we have spent a lot of money but that's the same as a lot of teams. I can assure you we are not the only team in the world who spend money. There are many."