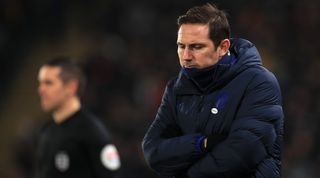 Questions are being asked at Chelsea about Frank Lampard's management of the squad, reports the Telegraph.

Specifically there are concerns about how Lampard has used Olivier Giroud this season and more recently, his decision to drop Kepa Arrizabalaga.

For the second successive Premier League game, Kepa was on the bench on Monday as the Blues lose 2-0 at home to Manchester United. Instead, Willy Caballero was once again preferred.

Lampard had even said that Kepa had responded well before the winter break to being dropped against Leicester City. Yet the 25-year-old was not recalled for the visit of United.

While some within the club appreciate Lampard may not view the Spaniard as part of his long-term plans, they think he should still persevere with the world's most expensive goalkeeper for the time being; rather than playing 38-year-old free transfer Caballero.

There is also a feeling that Lampard has failed to utilise Giroud this term. Clearly not in his plans either, the Frenchman was close to joining Tottenham Hotspur during the January transfer window. Yet that was on the premise that Chelsea signed a replacement - which they did not.

So Giroud remains at Stamford Bridge, failing to make a league appearance since November 30 before Monday's defeat. The 33-year-old came off the bench to replace the ineffectual Michy Batshuayi and was unlucky to have a goal ruled out by VAR.

Giroud has played just eight times this term, although has still managed to score four goals in five games for France. Despite his lack of game time, the striker is expected to be included in the French squad for Euro 2020.

With Tammy Abraham injured and Batshuayi out of form, there is a feeling Giroud should be playing. It's expected he will start against Spurs at the weekend.

Under Lampard the Blues have seen a 12-point gap between themselves in fourth and the chasing pack reduced to just one point. Tottenham, who are in fifth, will overtake them on Saturday if they win in West London.

Lampard is still expected to be given time, but the pressure is building.