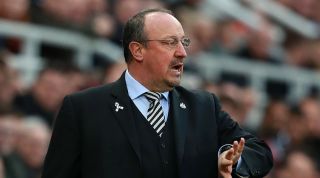 The Spaniard’s current deal expires at the end of June, after he led the Magpies to a 13th-place finish in the Premier League this season.

According to The Guardian, Benitez has held talks with club owner Mike Ashley for seven days, including a meeting in person last Thursday in London.

Further talks have been held between the manager and Newcastle managing director Lee Charnley, but an agreement is yet to be reached.

The report suggests that a second face-to-face meeting between Benitez and Ashley will need to take place before any contract is finalised, where written guarantees of promises will be provided.

Stumbling blocks include Benitez’s desire to bring in older players to help his side challenge for European places, including the likes of on-loan West Brom striker Salomon Rondon and Manchester United playmaker Juan Mata, with Ashley preferring to focus on younger players with a higher potential resale value.

Ashley is said to be willing to hand the former Chelsea and Liverpool boss a £50 million transfer kitty for the summer and funds from player sales would be added to that pot.

Additionally, Benitez is understood to have wanted to push for investment into the club’s training facilities but is now willing to put that on ice.