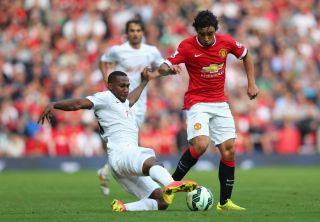 Fourth-placed United travel to West Brom on Monday before a mouth-watering double header against leaders Chelsea and champions Manchester City at Old Trafford and the Etihad Stadium respectively.

Chelsea are eight points clear of Louis van Gaal's men with seven games played, but full-back Rafael is confident that United can defy the pundits and challenge for top spot if they rise to the occasion in the next three weeks.

Van Gaal secured back-to-back wins for the first time as United manager prior to the international break, and there is evidence that Rafael and his team-mates are gradually getting used to the Dutchman's training methods and style of play.

"If we start to understand the way of playing, like we are doing, and when the results are positive, everything starts to run smoothly and for sure we have chances to win the title," Brazil international Rafael told Perform.

"We will have three difficult games - against West Brom away, after this we face Chelsea, the actual leader, and then Manchester City in their stadium. These games will be very important for us.

"Against West Brom we need to be very focused as they are showing good performances, then we face Chelsea at home and City.

"We need to think about these three games and if we win we will be close to the leader, probably in second place, so we need to be positive and try to win these three matches."

While Van Gaal's side are starting to look like the United of old going forward – boosted by the arrival of exciting attacking duo Angel di Maria and Radamel Falcao – it has been a different story at the back.

United have conceded 10 times in the Premier League – including five in a humbling defeat at Leicester City – and managed just two clean sheets.

Rafael, though, is not reading too much into the side's suspect defensive start to the season and insists it will take time to adapt to Van Gaal's philosophy following David Moyes' woeful tenure, which last season saw United fail to qualify for Europe for the first time in 25 years.

He said: "It's completely different, different football philosophies, this is the biggest difference between them, but it is normal.

"Van Gaal is a strong coach. He admires the right things, he ask everybody to be on time for the activities, we can’t be late, he likes to see us training hard.

"So, he has some differences, especially the philosophy and we need to be adapted to this, however it’s something right and the proof is the titles that he won."