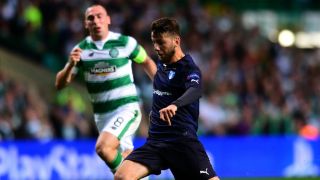 Crystal Palace have signed midfielder Erdal Rakip on loan from Benfica until the end of the season.

The Sweden Under-21 international joined the Portuguese champions from Malmo earlier this month and becomes Roy Hodgson's first signing of the January transfer window.

"I believe this is a league that suits me and my way of playing," Rakip told Palace's official website. "It's fast-paced and physically intense, and I'm a classic, balanced number six - a box-to-box player who runs up and down the field.

"I hope to adapt quickly in order to help the team and show my qualities - I have been training since the season ended and I feel fit and ready to play straight away."

Hodgson enjoyed a celebrated spell in charge of Malmo during the 1980s, winning five consecutive Allsvenskan titles and Rakip conceded the former England boss' status in his hometown was a factor in his decision.

"It will be an honour playing for Roy. He is a legend in Malmo and everyone know who he is," Rakip added.

Palace are 13th in the Premier League, three points above the relegation zone, after their impressive revival under Hodgson was checked by a 4-1 weekend loss at Arsenal.