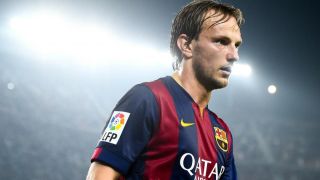 Barcelona midfielder Ivan Rakitic said his team-mates will be doing all they can to claim the 2014-15 treble.

Luis Enrique's Barcelona top the La Liga standings by two points with five matches remaining, while the club are set to contest the Copa del Rey final against Athletic Bilbao on May 30.

Barca are also in the UEFA Champions League semi-finals, where they will face Bundesliga champions Bayern Munich over two legs for a spot in the tournament decider.

"We're doing well, we're on the right path and we're going to fight right up until the last day to win as many trophies as possible," the Croatia international said.

Winning the treble may be the perfect farewell for Spanish veteran Xavi, who is tipped to leave the Catalan giants at the end of the season.

Xavi has been linked with a lucrative move to Qatar, while MLS is a possible destination, however Rakitic wants the 35-year-old club icon to stay put.

"I really appreciate everything about Xavi," Rakitic added.

"He's an important figure on and off the pitch and we would love him to continue here with us."

Barca can maintain their lead atop the league standings with victory at home to Getafe on Tuesday.