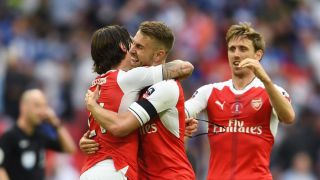 Ramsey stooped to head home a sublime Olivier Giroud centre to give Wenger his seventh FA Cup success and ensure Arsenal won the competition for a record 13th time.

The Wales international credited Wenger's decision to switch to a new system, using a back three, as they won their last six games of the season in all competitions to end the campaign on a high.

Wenger's future remains up in the air, with his contract set to expire and a board meeting planned on Tuesday, but Ramsey is hoping an agreement can be reached for the 67-year-old to sign a new deal.

"Of course I think he'll stay," Ramsey told BBC Sport. "He's been fantastic for me and the players.

"We changed the formation and had a lot of success. Fair play, it paid off and hopefully he'll be here next season. We owe him a lot."

Ramsey also netted the winner in Arsenal's FA Cup victory over Hull City in May 2014 and he insisted the club's season should now be judged prosperous despite missing out on qualification for the Champions League for the first time in two decades.

"I can't describe this," Ramsey said. "It's been an up and down year but to finish with an FA Cup, it has to be deemed a success.

"I love this competition and I love playing here. We deserve it and I'm happy for the boys.

"That's my game, I love to make late runs and Oli knew I'd be there. He put it on a plate for me to score the winner."

"Obviously it was a great performance," Welbeck told BBC Sport. "We stuck in there when it looks like things were against us.

"You always worry when Chelsea got the equaliser and it was a game full of surprises. But we dug deep and Rambo got us the winner and we've got the FA Cup once more."