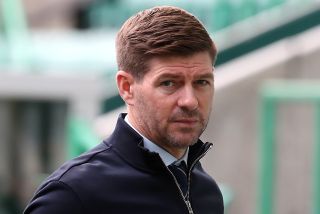 Rangers are working on fulfilling Steven Gerrard’s wish for a new midfielder ahead of Monday night’s transfer deadline – with Alfredo Morelos set to remain at Ibrox.

The Light Blues boss has made no secret of his desire to beef up his options in the centre of the pitch and has been linked heavily with a move for Preston’s Daniel Johnson.

But Ibrox chiefs are not expecting any major departures, meaning Lille target Morelos will be staying put in Glasgow unless an 11th-hour bid materialises from France.

The Colombian had agreed personal terms with the Ligue 1 outfit earlier this summer but Rangers have refused to lower their £20million asking price and Lille have turned their attention elsewhere after signing 30million euro frontman Jonathan David.

Speaking on Friday, Gerrard – who has allowed youngster Kai Kennedy to join Inverness on loan to January – said: “The board, myself and Ross Wilson are still trying to add the person in the position we feel we need before the window shuts.

“But we’ll have to see how the next three days pan out in terms of ins and outs. It’s difficult to control because you never know what’s going to land on your desk and whether you are able to get someone over the line when you are trying to make it happen.

“There certainly won’t be (multiple) additions. I think if we do well in the next couple of days there might be an addition.”

Celtic will in the market too for new recruits but speculation Robert Snodgrass could join team he supports is wide of the mark.

The PA news agency has been told there is no deal is in the offing for the West Ham winger.

And Neil Lennon was keeping his cards close to his chest, saying only: “I’m not talking about any speculation.

“You could throw any number of names at me but we are working on one or two things and hopefully we can accomplish that.”

Aberdeen boss Derek McInnes may make a move himself but it is likely to be a “short-term deal or a loan”, while Hibernian boss Jack Ross is still waiting to sign off on a six-figure deal for his former St Mirren midfielder Kyle Magennis.

Dundee United have completed a move for Alaves’ Cameroon international Jeando Fuchs but face an anxious wait to see if Burnley will follow up on their interest in striker Lawrence Shankland.

Kilmarnock have bigger things to worry about after their entire squad were forced to self-isolate amid a Covid-19 breakout at Rugby Park but boss Alex Dyer has already admitted his spending is over for this year.

Livingston boss Gary Holt made his 12th signing of the current window last week with the capture of Jay Emmanuel-Thomas but may not be done yet with the Lions still looking to strengthen further.

Ross County assistant boss Richie Brittain admits the Staggies are just hoping to survive the final day of the window without losing talisman Ross Stewart, who has been linked with a number of English Championship sides.

He said: “You can’t stop rumours, you can’t stop teams being interested. But when that window closes, we’ll all be grateful for it. There is stuff ongoing (on signings) but that’s not for me to say.”

Motherwell will worry that someone may decide to test their resolve when it comes to Allan Campbell. The Scotland Under-21 ace is in the final year of his contract and is already attracting admiring looks from Aberdeen and Hibs.

Hamilton boss Brian Rice is ready to take a deadline day risk on a signing despite admitting he has not been able to make as many scouting trips as he would normally like when hunting fresh talent.

St Mirren are rumoured to be on the verge of a loan deal for 19-year-old Rangers centre-half Daniel Finlayson while St Johnstone boss Callum Davidson revealed he is close to signing Israeli striker Guy Melamed.

The 27-year-old is a free agent after departing Maccabi Netanya this summer.

Saints are the lowest scorers in the Premiership so far and Davidson said: “Guy Melamed is here and hopefully we can get the paperwork done in time. Hopefully he will bring goals.

“I have looked for someone a little bit different, someone who can bring a spark to the team.

“We’re hoping he can come in, form a good partnership with the other players and score goals for us.”