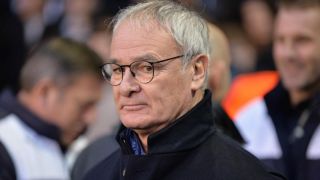 Claudio Ranieri says Leicester City's Premier League rivals do not truly believe they can win the title this season.

Leicester have defied the odds to challenge the elite in the top flight this term and a hard-fought 1-0 win at Tottenham on Wednesday left them level on points with leaders Arsenal, who possess a superior goal difference.

However, Ranieri feels that while Leicester's fellow contenders may talk his side up in public, privately they do not see them as a genuine threat.

He said: "When I was with a big team and I saw teams like Leicester, I would also say, 'This team can fight for the title'.

"But it is one thing to say it and another thing to do it. It's easy to say, 'yes, Leicester can fight for the title', but I think they don't believe it.

"Everybody thinks, 'sooner or later they will slow down'.

"If 'little Leicester' slow down that's normal, but it's not normal what Leicester are doing.