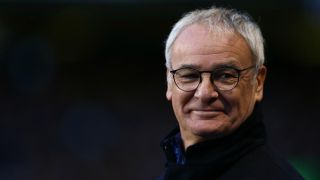 Claudio Ranieri wants to lure a new striker to Leicester City before the end of the January transfer window.

Following the departure of Andrej Kramaric to Hoffenheim, Ranieri currently has Jamie Vardy, Leonardo Ulloa and Shinji Okazaki as his established centre-forward options as he pursues a Champions League place.

However, the Italian is keen to add to his ranks before the February 1 deadline.

"We have our eyes open," said Ranieri in a pre-match media conference prior to the Premier League clash with Stoke City this weekend.

"If there is a good opportunity for us we are ready.

"I am very confident [of getting a striker].

"When I said my staff is fabulous is because every day they are working, not now because the window is open.

"Every day they are working and when I ask for something they are ready. I would like to do it sooner if possible."