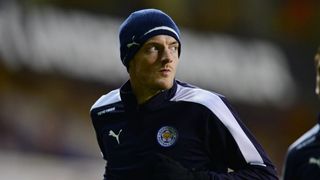 Leicester City manager Claudio Ranieri has revealed he is not sure when star Jamie Vardy was last fully fit.

Vardy has been crucial to Leicester's incredible Premier League campaign which sees the club sit second in the table, adrift of leaders Arsenal on goal difference.

The England international broke a Premier League record by scoring in 10 consecutive games on the way to his tally of 15 league goals this season.

But Ranieri said the striker has been battling a groin injury and had not trained for the last month, having only played just over 70 minutes of the 1-0 win at Tottenham on Wednesday.

"Jamie will start to make training sessions with us, he's getting better. It's important, it'll be yes or no as to how I manage him.

"It will depend on the match and if I see he's a little tired. I prefer to manage him during the training session. The important players must play every time and get some rest during the week."