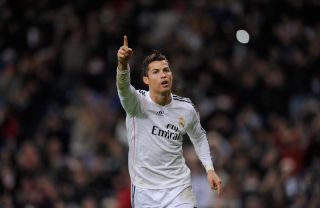 Pele and Diego Maradona are invariably put on a pedestal above all other contenders for that title.

However, Raul feels current kingpins Ronaldo and Lionel Messi must also now be held in the same esteem.

"I think now he is at the top, and if he continues in the same way, he could be the best of all time," Raul told the BBC World Football Show.

"I think Cristiano and Lionel Messi are two of the best players in the history of the game.

"Are they better than Pele or Diego Maradona? They are at the top, but I think it is difficult in football to say who is first or second or third. But if Cristiano continues for five years..."

The 37-year-old striker, now with New York Cosmos in the USA, is also confident Ronaldo will break his own Real scoring record.

Raul netted 323 times for Madrid, eclipsing the tally of Alfredo Di Stefano, but Ronaldo has already reached 281 in just 267 matches.

"I am sure Ronaldo will beat it and I will be happy for him," he added.