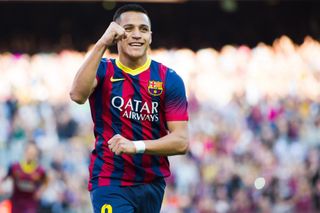 Alexis has racked up 17 goals in 30 La Liga appearances for Gerardo Martino's charges this season.

However, the Chile international has often been named on the substitutes bench for key matches, including both UEFA Champions League quarter-final games with Atletico Madrid and the Copa del Rey final with Real Madrid.

That has led to speculation that the 25-year-old could return to Serie A - where he spent five years at Udinese - to link up with Antonio Conte's side who are set to clinch a third consecutive league title.

Former Juve striker Ravanelli, who spent four years in Turin between 1992 and 1996, believes any move for Sanchez would be shrewd business for the club.

Speaking to TuttoMercatoWeb, he said: "Sanchez would definitely be the right man for Antonio Conte's team.

"To have him in attack alongside (Carlos) Tevez and (Fernando) Llorente would be fantastic.

"Obviously, playing at such a high level with Barcelona these past few years is a real help – they're not just any team.

"I believe he's the right man because over the last three years he's amassed a wealth of experience in Europe.

"Juve can make that next step with someone like Sanchez."