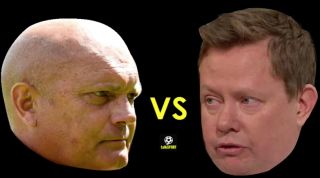 Video: Referee shoulder barges Russian player then sends him off

Speaking on the Alan Brazil breakfast show on talkSPORT, former Chelsea and QPR midfielder Ray Wilkins was not impressed with Celta Vigo goalkeeper Sergio Alvarez and how he failed to save Marcus Rashford's free-kick in the Europa League on Thursday night.

The goal was all that separated Manchester United and the Spanish club in the first leg of their semi-final clash.

However, Wilkins' point of view that "a real goalkeeper would have saved it with his teeth" created a point of contention between himself and Sun journalist Neil Custis. Custis believed the free-kick was extremely difficult to save, and immediately asked Wilkins: "Are you actually being serious here or is this a joke?"

This led to a furious personal row between the pair, with the former England international Wilkins going as far as to say: "Don’t talk to me about being ridiculous when it comes to footballing knowledge because you don’t have any."