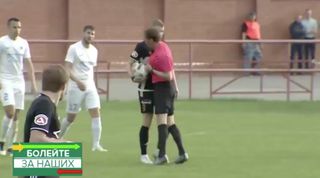 In a Russian third-tier match with Rotor Volgograd hosting Armavir, the visitors won a tight contest 2-1 to close the gap on the league leaders to five points. However, victory came at a cost. Armavir's Andrei Myazin was sent off in the 72nd minute after he picked up his second yellow card of the afternoon.

Myazin appeared to be protesting about an incident and confronted the referee to complain. The referee, who is of course responsible for being the game's peacekeeper, raised the tension an extra notch as he shoulder barged the angry 29-year-old.

Clearly a bit shocked, Myazin pushed him back and received a second yellow card, resulting in his dismissal.

We're not quite sure that's the kind of player interaction the Premier League's PGMOL group promotes in England.