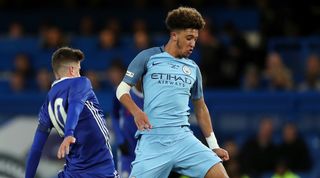 Video: In Russia, Chertanovo concede a very embarrassing own goal

Jadon Sancho is only 17 years old, but already he's developing a track record for terrorising opposition full-backs - and he's proved it again on international duty.

Sancho, who signed a new contract with Manchester City in March, is currently starring for the England U17s at the European Under-17 Championship in Croatia.

And in England's fourth game against Norway, with the Scandinavian side taking an early 1-0 lead, the Three Lions found a quick equaliser through Liverpool's Rhian Brewster.

However, the assist for Brewster's goal was superb. Sancho sprinted from England's own half and took the ball all the way to the penalty box before doing a ball-roll around the goalkeeper. He then squared the ball into the path of Brewster to tap in.

England are level after some superb work from Jadon Sancho… May 4, 2017

There's some very exciting young wingers at Manchester City, and Sancho is another one to add to the list.