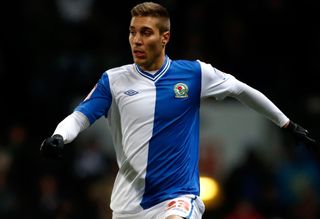 Rochina will hope to get regular first-team football in Madrid after being restricted to just five appearances in all competitions this season at Championship club Blackburn.

He spent part of last season on loan at Real Zaragoza and is now set for another temporary return to his native Spain with relegation-threatened Rayo, with a permanent move a possibility at the end of the campaign.

The 22-year-old came through the youth ranks at Barcelona before joining Blackburn on a four-year contract in 2011. He has made 54 appearances for Blackburn in total, scoring 11 goals.

Rayo announced the signing on the club's official website on Monday, with the player set to be officially unveiled on Tuesday.

"Ruben Rochina is officially a Rayo Vallecano player until the end of this season, on loan from Blackburn Rovers," a statement read.

"The club (also) reserves a purchase option at the end of the current campaign."