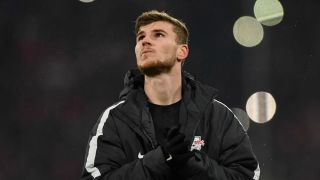 RB Leipzig cannot afford to keep Timo Werner if he will not extend his contract with the Bundesliga club, says chief executive Oliver Mintzlaff.

Werner is reportedly a transfer target for Bayern Munich having hit 11 goals in the Bundesliga this season, one more than Robert Lewandowski.

The Germany striker's contract runs out in 2020 and Mintzlaff confirmed the club will consider a sale if Werner, also linked with Premier League clubs Chelsea and Liverpool, will not renew his deal.

"Of course, we have to know at the latest after the end of the season," Mintzlaff said to Kicker. "Because of course, a club like us cannot afford to go with Timo Werner into the final year of his contract.

"It's logical that such a player should be courted by clubs that have a very different sporting perspectives and different financial possibilities than we have, but as long as we evolve as a club, Champions League participation would be very helpful."

Mintzlaff added club officials have told Werner of their intentions and said everyone involved in talks had "the same understanding" of his future at the club.

Leipzig are fourth in the Bundesliga having won three of their last five matches ahead of the mid-season break.