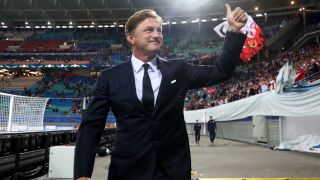 RB Leipzig coach Ralph Hasenhuttl admits his side were nervous during their Champions League debut, but the Austrian was satisfied with a point against Monaco.

The German side were held by last season's semi-finalists Monaco in a rather cagey 1-1 draw in their Group G clash on Wednesday.

Emil Forsberg's spectacular first-half strike had given Leipzig the lead in front of a sold-out Red Bull Arena, but the hosts were pegged back almost immediately when Youri Tielemans levelled two minutes later.

The newcomers had the better opportunities to win the game with Timo Werner and Jean-Kevin Augustin both going close, and Hasenhuttl conceded his side were not ruthless enough.

"We can live with the point even if we didn't give them much to work with," Hasenhuttl said, via UEFA.

"We kept them quiet and created a lot of chances ourselves. But when you take our performance in the context of our UEFA Champions League debut you could see there were a few nerves on the ball and we weren't as ruthless in taking the risks in the final third.

"I opted against throwing on an extra attacker to avoid risking potentially conceding again ourselves against a very dangerous opponent. However, we're satisfied with the point."

Tielemans, an off-season signing from Anderlecht, was happy to get on the scoresheet, but believes his side could have won the game.

"I think we had the chances to score a second as they left a lot of space in behind,” he said.

"We should have exploited those situations better. It was a very physical match and I think what we did was decent."