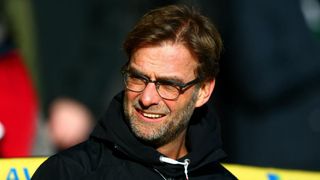 Liverpool manager Jurgen Klopp says reaching the League Cup final is all that matters as he prepares for the second leg of the semi with Stoke City.

Klopp's side head into Tuesday's clash at Anfield with a 1-0 lead from the first leg, courtesy of Jordon Ibe's winner at the Britannia Stadium earlier this month.

And Klopp - whose Borussia Dortmund side walked out at Wembley in the 2013 Champions League final - says a return to play under the arch is the only thing that matters against Stoke.

"We have time. Tomorrow is only one target - go to the final," he said in Monday's media conference. "Then celebrate in your mind, because we have the next game on Saturday.

"It's football, and you should not waste opportunities to win something. For the players it is really important, this game. They want to go the final. Hopefully, I can come with them.

"A final is about the winner. I don't hear about second place in the Capital One Cup - I don't know who got to the final four years ago. It's only memorable when you win it.

"Now we have the best situation you can have in a second leg. We won the first game away, now we have the opportunity to play at Anfield.

"I heard about the special atmosphere at Anfield, and I am really excited, looking forward to it. Let's take the power of LFC and go to the final!"

Liverpool's struggles against set-pieces continued at Norwich City on Saturday, where Klopp's side were saved by Adam Lallana's last-gasp winner in an enthralling 5-4 classic.

"We have our problems, and they have one or two as well. You have to be ready," the German added.

"We had a good talk [about defending set pieces], intensive. Not the first one, but hopefully the last one.

"It's not about the formation, it's not always about the quality of the set plays. It's about what we are doing in the situations.

"In Norwich, we defended the first ball well but struggled then with the second or third. That's a normal reaction that you would speak about.