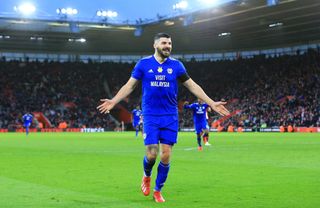 Cardiff went ahead early on through Callum Paterson but Reading equalised in the eighth minute from Yakou Meite’s seventh goal of the season.

Robert Glatzel and skipper Sol Bamba missed good chances to settle it for Cardiff towards the end.

Midway through the first half, as play continued, an announcement was made over the public address system to Cardiff fans urging them to desist from alleged racist and homophobic chanting that was deemed “not acceptable”.

Reading were reduced to 10 men in the 81st minute when centre back Tom McIntyre was dismissed for collecting a second yellow card.

Both sides had reached round four with replay victories – Reading 2-0 at League One Blackpool, Cardiff 4-3 at League Two Carlisle.

The respective managers made a total of 18 changes from their previous outings in the Championship – the entire 11 by Reading’s Mark Bowen and seven by Cardiff’s Neil Harris.

Two goals in the opening eight minutes got the tie off to a hectic start.

Cardiff went ahead in the fifth minute, when Meite clumsily lost possession in midfield.

But Reading were soon level from Charlie Adam’s delicate chipped pass, which Meite chested down before lashing past Alex Smithies.

Cardiff replied with a fierce 20-yard effort from Will Vaulks, which home goalkeeper Sam Walker did well to beat away.

Reading thought that they had gone in front in the 35th minute after Smithies failed to hold a powerful shot from Sone Aluko.

Meite tucked home the loose ball but was ruled offside.

Reading began the second period strongly, with Andy Rinomhota having a shot blocked on the edge of the Cardiff area.

Play was then held up for several minutes as Reading captain Matt Miazga received treatment for what appeared to be a leg injury.

He was eventually carried off on a stretcher and replaced by Gabriel Osho.

Cardiff upped the tempo afterwards and Bamba went close with an audacious back flick from a Gavin Whyte cross.

Walker was also forced to make a smart point-blank save from Glatzel.

McIntyre saw red nine minutes from time for a rash tackle on Paterson then Bamba, in the frantic closing stages, somehow headed wide with the goal at his mercy.