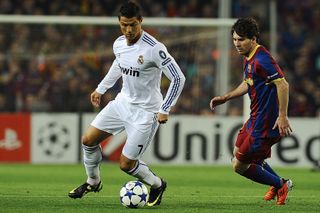 During a recent talk at the Oxford Union, the FIFA president was asked for his opinion on who is the better player between Ronaldo and his Barcelona counterpart Lionel Messi.

The two players are widely considered to be the best in world football, with both men having been named on the 23-man shortlist for this year's FIFA Ballon d'Or award, revealed on Tuesday.

When asked about his preference, Blatter insisted that while both are great players, he has a leaning towards Messi.

He followed up with a quip about the amount of money that Ronaldo spends at the hairdressers, in comments that have now drawn the ire of the Liga giants.

"They are both exceptional players but are totally different," Blatter said. "Football is about the difference between stars. Lionel Messi is a good boy that every father, every mother would like to have at home.

"He is very quick, he is not exuberant, he plays well, he is a good boy. That is what makes him so popular, because he is this nice man and that is why he gets votes.

"The other one (Ronaldo), he is something else, he is like a commander on the field of play.

"This is the other side of football and it is good to have such commanders on the field also. That gives life to football.

"One has more expenses for the hairdresser than the other, but that doesn't matter.

"I cannot say who is the best, there will be a contest this year and then January next year it will be announced. I like both of them, but I prefer Messi."

Asked about the comments ahead of Real's game with Sevilla on Wednesday, coach Carlo Ancelotti confirmed that the club will seek clarification from Blatter about his perceived lack of respect towards their talisman.

"The president has sent a letter to FIFA asking for a correction of what I consider disrespectful (comments) to a very professional player," the Italian said.

"And I am in complete agreement with the president. I have not talked about this with Cristiano Ronaldo, who proves to be a great player. (He is) respectful to all parties, and should stay that way."