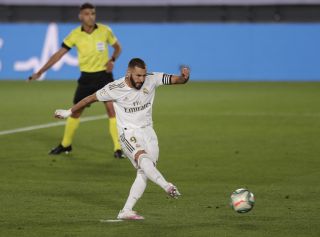 Real Madrid extended their lead at the top of LaLiga to four points with a 2-0 home win against Alaves.

Karim Benzema converted an early penalty and later provided the assist for Marco Asensio’s second-half tap-in as Zinedine Zidane’s side edged closer to clinching the title.

Real were given an early scare when Alaves’ former Stoke and Newcastle striker Joselu headed against the crossbar.

But Benzema converted an 11th-minute penalty – his 18th goal of the season – after Ximo Navarro was adjudged to have made contact with Ferland Mendy in the area.

Benzema then turned provider by setting up Asensio for Real’s second goal, with video footage showing the Frenchman was onside when receiving the ball after it had been referred to VAR.

Domingos Duarte struck a late winner for Granada, who stepped up their bid for European football next season with a 3-2 win at Real Sociedad.

Duarte headed home in the 88th minute after Sociedad had fought back from 2-0 down at half-time.

Granada, promoted to the top flight last season, climbed to within one point of seventh-placed Sociedad, who occupy the final Europa League berth.