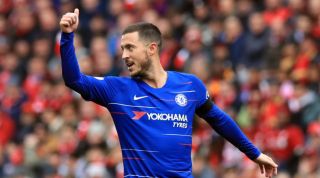 According to Marca, Hazard will be announced as a Real Madrid player in the next few days.

He will be their third pre-agreement signing, joining Rodrygo Goes and Porto's Eder Militao.

Zinedine Zidane reportedly aasked Florentino Perez to sign Hazard as soon as he was reinstated as coach, but the parties have been negotiating the deal for many months - with Mateo Kovacic's loan to the Blues playing a paet in the deal.

It's believed that Chelsea made last-ditch contract proposals to their Belgian wizard, but his mind was made up.

The deal is estimated to set Real Madrid back around €100 million.

Quiz! Can you name all 59 players to score in a Champions League final since 1992?