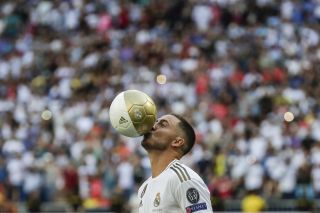 Hazard joined Real Madrid from Chelsea last summer for a fee that could rise above £100m.

The Belgian won two Premier Leagues and two Europa Leagues during his time in London, but he's missing a Champions League winner's medal.

"As I said on my first day, for me, the Champions League is important," Hazard told Real Madrid TV (via AS).

"In London, I only once reached the semi-finals. Chelsea had won their only Champions League trophy the year before I joined.

“They've won it a lot of times here in previous years and it's difficult to win it every season because there are many teams involved, but I've come here to win it because it's important for everyone and that goes for me too.”

However, Hazard's career in Madrid started slowly, and the 13-time Champions League winners have stuttered in the group stage.

But Hazard's first goal for the club came earlier this month has given him confidence.

The 28-year-old believes Los Blancos can not only win the Champions League but the La Liga and Copa del Rey also.

“We're going to give our all to win the Champions League, LaLiga and the Copa del Rey. Come the end of the season, we'll have to lift one, two, three or four pieces of silverware,” said the ex-Chelsea player.

“We hope to win and I hope to give the best possible account of myself, win games and for everything to go well".

Madrid currently sit sixth in the League table but are only two points off the top.

Their next fixture in the Champions League is at home to Galatasaray on the 6th November.

Quiz! Can you name the players who've scored 10+ Premier League goals for Chelsea?