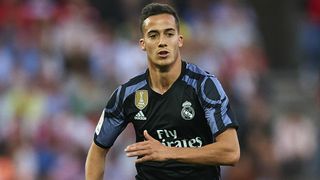 Real Madrid winger Lucas Vazquez says the club have a special connection with the Champions League as they close in on another appearance in the final.

With a 3-0 lead over city rivals Atletico Madrid in hand, Zinedine Zidane's men are in good shape going into the semi-final, second leg at the Vicente Calderon on Wednesday.

Madrid are record 11-time European champions and Vazquez – a winner of the competition last season – feels the fans and his side's history make Champions League nights so special.

"The fans transmit the importance to us and when you play a Champions League game, you get goosebumps, there is no better feeling in the world than that.

"Every match against Atletico is difficult because they are a great team, with great players. We know how to beat them and we'll try to do everything possible to do so."

Vazquez came on as a substitute in the final victory over Atletico in Milan in 2016 and cherishes the memory.

"I tried not to think about the importance of match I was playing in," he said.

"In those games you have to be more relaxed than ever to try to help the team to win the Champions League.

"When Zidane calls you to say you are playing you get that feeling in your stomach. In the end the reward was worth it."