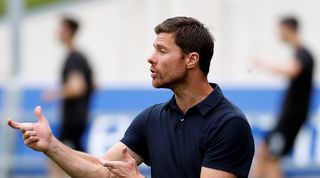 Zidane returned for a second spell as Madrid manager in March, having initially left the club at the end of the 2017/18 campaign.

The Frenchman was heavily backed in the transfer market, with los Blancos spending upwards of €300m in the summer and Zidane given a prominent role in identifying targets.

However, the Spanish giants have made a stuttering start to the season, winning two and drawing two of their first four games in La Liga.

Madrid were also humbled 3-0 by PSG on Wednesday, leaving them bottom of their Champions League group after matchday one.

And according to Mundo Deportivo, former Madrid, Liverpool and Bayern Munich midfielder Alonso would be Perez’s first choice if Zidane was dismissed.

The Madrid boss is not thought to be under immediate pressure despite his team’s poor start to 2019/20, but Perez is keen to identify alternatives in case los Blancos’ form does not improve.

Alonso made 236 first-team appearances during his five-year spell at the Santiago Bernabeu as a player, winning one La Liga title, two Copas del Rey and the Champions League.

The former Spain international went on to represent Bayern for three seasons, where he won a trio of Bundesliga crowns as well as a DFB-Pokal.

He hung up his boots in 2017 and has since moved into management, taking charge of Real Sociedad B this year having previously coached Madrid’s Under-14s.

Jose Mourinho and Max Allegri have also been mentioned as potential successors to Zidane, but Perez would prefer a younger coach in the mould of Alonso or Raul, the legendary ex-Madrid striker who is currently in charge of the club’s B team.