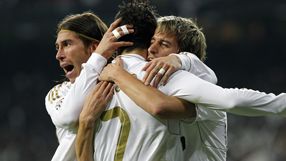 With the defence of their La Liga title in tatters, as they trail leaders Barça by 15 points, coach Jose Mourinho has targeted the cup and the Champions League as the club's priorities.

However, the cup semi-final arrives with the side hampered by injuries and suspensions.

Captain and goalkeeper Iker Casillas has been ruled out for up to three months after needing surgery on a fractured bone in his hand, and defender Pepe has yet to return after ankle surgery.

Defenders Sergio Ramos and Fabio Coentrao, and winger Angel di Maria, are all suspended for the first leg at the Bernabeu.

"It's a really important game, a tough game," Real's leading scorer Cristiano Ronaldo said after scoring a hat-trick in their 4-0 thrashing of Getafe on Sunday.

"We're playing at home, which is a great opportunity to be successful. We'll be missing a number of players, key players, who are very important for this squad, but that's not an excuse.

"We have to play well because Barca are an amazing team."

Aside from their missing players it has been a turbulent few days for the 2011 cup winners after a report in Marca sports daily said that captains Casillas and Ramos had threatened to leave unless Mourinho was dismissed.

Real president Florentino Perez made the unusual move of calling a news conference to deny the story, accusing the newspaper of lying.

The shock of losing Casillas at a critical stage of the campaign prompted the club to react swiftly and sign a replacement goalkeeper, Diego Lopez from Sevilla, though it will probably be reserve Antonio Adan who keeps his place on Wednesday.

Real have had the edge over Barca in direct meetings this term.

They beat them on the away goals rule in the season-opening Spanish Super Cup after drawing 4-4, and they grabbed a 2-2 draw in La Liga at the Nou Camp.

Ronaldo has got the measure of their defence and scored seven goals in the last six clasicos, and his rivalry with the man who again beat him to the World Player of the Year title, Lionel Messi, will continue to take centre stage.

After Ronaldo took his tally in La Liga to 21 goals with a hat-trick on Sunday, Messi went one better in a later game bagging four in a 5-1 rout of Osasuna to move on to 33.

"I don't thing Messi needs Cristiano to motivate himself, he has an unquenchable ambition," Barca's assistant coach Jordi Roura told a news conference.

Barca beat Real 4-3 on aggregate to knock them out of the Cup in the quarter-finals last year.

In the other semi-final, La Liga's second-placed side Atletico Madrid host Sevilla at the Calderon on Thursday hoping to have leading scorer Radamel Falcao back from injury.

Atletico, who were surprise 3-0 losers at Athletic Bilbao on Sunday, lost 2-0 to Sevilla in the 2010 cup final.