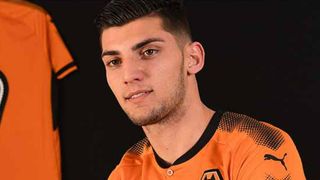 Mir had been linked with LaLiga and Champions League title-holders Real Madrid but the Spanish forward has agreed a four-and-a-half year deal at the Championship outfit.

The 20-year-old scored 15 goals in 19 appearances for Valencia Mestalla in Segunda Division B this season as he joins Wolves, who are 12 points clear in their pursuit of top-flight football and already boast Ruben Neves, Ivan Cavaleiro, Diogo Jota and Helder Costa in their ranks.

"I'm really excited to play with this team and to try and help the players achieve all the goals that the club has," Mir said.

"It's a club that has already played in the Premier League. It's one of the biggest clubs in England and I'm really looking forward to my time with Wolves.

"I think the type of football that is played in England is very good for me as a player. It suits me and I think, with training, I could bring some good things to the team."

Mir will also link up with Nuno, having worked with the former Valencia boss at the Mestalla before the 43-year-old departed in 2015.

"Nuno played a big part of my decision to come here. Wolves is a big project and it's an exciting challenge to be a part of it," he added.

"It's great to be able to work with a coach that I already know and that was an important factor in signing for the club."