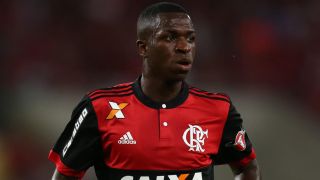 Vinicius, 16, made his professional debut for the Brazilian giants on Saturday, coming on against Atletico Mineiro.

The forward is tipped to join Madrid, with reports in Spain suggesting a deal is done for the teenager to make a €45million move in June 2018.

Flamengo announced a new deal for Vinicius on Monday, with a salary readjustment and increase in his release clause from €30m to €45m.

Vinicius has starred at youth level for Flamengo and for Brazil's Under-17s.

He scored seven goals for his victorious Brazil side in the South American Under-17 championships earlier this year.