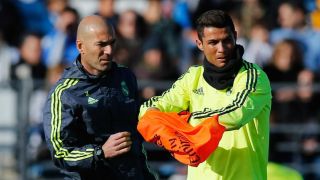 All eyes will be on Zinedine Zidane when Real Madrid face Deportivo La Coruna in La Liga on Saturday for the new head coach's first game in charge.

Rafael Benitez was sacked by president Florentino Perez after only 18 league matches at the helm and replaced by the World Cup-winning club legend.

Zidane has made it clear that as well as entertaining the Santiago Bernabeu supporters, his priority is winning the two trophies that are still available to Madrid after their expulsion from the Copa del Rey.

Madrid will meet Roma in the Champions League last 16 next month, but before then the 43-year-old has six league games to make up ground on their title rivals, starting with the match against Deportivo.

Los Blancos are four points behind leaders Atletico Madrid and two behind Barcelona, who still have a game in hand over the capital clubs.

"I am motivated and excited," Zidane said of his new role. "I am looking forward to taking this opportunity with the best team in the world.

"I only want to win trophies with this team. Our objective is to win, we have got two trophies that we can win and we are going to try until the end of the year

“My first words have been important for all the players because we have trained in front of the fans.

"I said to them that I am very happy to be beside them, that a new adventure is starting and that we are going to try to do everything possible to complete the objectives

"You have to be close to the players and have a good relationship with all of them. I am responsible for the team and I want everything to go well.

"I am going to try to add a personal touch and an attacking touch. I will try to maintain my managerial playing style and I want to get the players to have a good time out on the pitch."

Deportivo sit seventh in the table, 10 points adrift of Madrid. They have only lost one of their nine league away games this season, although they have been beaten in all of their last four meetings against Zidane's new side, conceding 17 goals in the process.

On the injury front for the hosts, Dani Carvajal (hamstring) has not played since November, but Sergio Ramos returned to play in the 2-2 draw with Valencia, which turned out to be Benitez's final match in charge.

- Real Madrid have gone nine league games in a row without a defeat against Deportivo (W8 D1).
- Deportivo have won just once in their last 30 games at the Bernabeu in La Liga (D4 L25), 0-1 in October 2004.
- Madrid have lost just one of their last 26 league games at the Santiago Bernabeu (W22 D3), which came against Barcelona.
- Madrid have gone five home games without a clean sheet, their worst such run with a single manager since the end of Jose Mourinho’s time in charge (7).
- Deportivo have faced the joint-fewest shots in La Liga this season (175), level with Barcelona.
- Cristiano Ronaldo has scored in four of his last seven La Liga games against Deportivo (nine goals, including three hat-tricks).
- Zinedine Zidane is the first French manager in Real Madrid history.