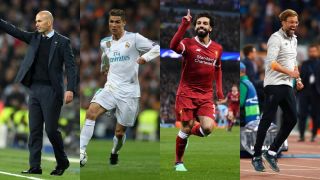 The wait is almost over. The match to decide the champions of Europe is just hours away.

The city of Kiev is poised, as are the players, coaches and fans of Real Madrid and Liverpool, who are hoping to end their season with a trophy – and the most prestigious trophy at that.

Madrid are 12-time kings of the continent and have won the last two finals in a row, but they meet one of the few teams to come close to matching their pedigree in the competition.

Neither has been consistent in the league but each has wowed at times in Europe. Who, then, will emerge victorious? Two Omnisport writers go head-to-head to decide...

REAL MADRID: THEY'RE EXPERIENCED, CONFIDENT... AND ANGRY
By Joe Wright

When it was suggested Liverpool are hungrier to win than Real Madrid this week, Zinedine Zidane's answer was pointed.

"We have the same excitement," he said. "Nobody can take that away from us or tell us we are less hungry than others. Nobody. We are Madrid. We always want more."

It's a peculiar argument that deserved such a dismissive response. Madrid have now reached four of the last five finals, winning three. They are the only team to win the modern Champions League twice in a row. They have Cristiano Ronaldo in attack. If anyone seriously thinks their hunger for success knows any satiety, they are in for a rude awakening.

No, they have not had an exemplary season. They finished 17 points behind champions Barcelona in LaLiga and suffered a genuinely humiliating Copa del Rey exit against Leganes. There is pressure on Zidane, enough to make it likely he will be sacked if they do not win on Saturday.

But consider their Champions League form. They emerged from a group featuring Tottenham and Borussia Dortmund, one of the toughest on paper, at least. They beat the champions of France, Italy and Germany in the knockout rounds, scoring 13 times in six matches.

Beyond the nous, they also still have the quality. Ronaldo has scored 28 in his last 18 appearances. Gareth Bale has hit form at just the right moment. Luka Modric, Toni Kroos and Casemiro have been the best midfield in Europe for the last two years. Marcelo, Dani Carvajal and Sergio Ramos have all played and starred in major finals.

It is also argued that Liverpool are tailor-made for illustrious, powerful teams like Madrid. It's true they defeated Manchester City in each leg of the quarter-final and ended their unbeaten domestic run. It's also true that their 4-0 win over Arsenal at Anfield in August was the only other time they beat any of the Premier League's other top-six sides this season.

All that will have an impact on this game. The most telling thing, though, was in that Zidane response. Madrid are experienced and confident, yes, but they are also angry, irked by the suggestion they could be outfought in the competition they claim as their own. And an angry Real Madrid is a dangerous beast indeed.

LIVERPOOL: IT'S HEAVY METAL FOOTBALL'S TURN TO TOP THE CHARTS
By Iain Strachan

Real Madrid may have reigned supreme in Europe of late, but the aristocrats from the Spanish capital must finally prepare to be dethroned on Saturday.

Appropriately, the revolution will be orchestrated by workers.

But fittingly, it was the loss of the Reds' most-high profile talent, Philippe Coutinho, to Barcelona in January that prompted his less storied former colleagues to redouble their efforts, propelling the team to the final and the likes of Roberto Firmino and Mohamed Salah to genuine stardom.

At different points on the career spectrum, tireless 32-year-old James Milner, breakout teenager Trent Alexander-Arnold and relative revelation Andrew Robertson are representative of a supporting cast that has defied their critics.

Having overcome the odds - and imperious Premier League winners Manchester City - to get this far, there is a sense that this is Liverpool's moment, against an opponent finally revealing regular vulnerability.

Despite stabilising after their early season woes, Madrid were left trailing in the wake of Barcelona and Atletico Madrid in LaLiga.

The progress of Zinedine Zidane's side through the knockout rounds of the Champions League was also far from convincing, with Los Blancos fortunate to survive their 3-1 loss at home to Juventus in the quarter-finals and far from their fluent best in beating Bayern Munich in the last four.

To take advantage, Klopp's side must balance the aggressive instincts that have served them so well with a justifiable degree of caution - a single mistake will be seized upon by a Madrid team certain not to be overawed on a stage they have become intimately familiar with in recent years.

The Reds, though, have fearsome weapons of their own in the form of Sadio Mane, Firmino and particularly Salah, who will prove the difference between the teams in a successful audition to inherit Ronaldo's mantle as one of the world's best.