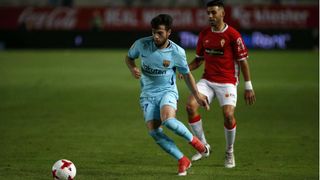 Jose Arnaiz scored a superb debut goal as Barcelona cruised to a 3-0 first-leg win over Murcia in the last 32 of the Copa del Rey.

The 22-year-old, drafted into the side after impressing for Gerard Lopez's B team, fired home the goal of the game after Paco Alcacer and Gerard Deulofeu had put the holders in control at the Nueva Condomina.

Ernesto Valverde named Arnaiz, Carles Alena and Thomas Vermaelen – making his first start of the season – in a much-changed line-up, as Lionel Messi, Andres Iniesta, Luis Suarez, Paulinho and Marc-Andre ter Stegen were all left out.

Murcia performed well for much of the first half, looking a threat on the break, but Alcacer's well-taken header saw Barca take control just before half-time.

Deulofeu added a second shortly after the break before Arnaiz netted the third to put the LaLiga leaders in command of the tie ahead of the return leg at Camp Nou on November 29.

The Catalans now turn their attention to a league trip to Valverde's old club Athletic Bilbao on Saturday, for which Arnaiz could well be in contention following an excellent display.

Arnaiz – playing on the left of the attacking three – enjoyed a bright start as the visitors applied the early pressure, although Alex Ortiz came close to nodding Murcia in front after Barca failed to clear their lines.

The home side were doing well to keep the majority of Barca's possession away from their penalty area, although Alena missed a glorious chance after 22 minutes, somehow turning the ball away from goal from point-blank range.

Murcia's counter-attacking game had Barca unsettled, though, and Fernando Llorente missed a great chance to grab a shock lead before half-time, blazing over the crossbar after Nadjib had bundled his way past Vermaelen.

Alcacer had endured a frustrating opening but made amends to put the Catalans ahead with barely a minute left in the half. Having shown excellent movement to elude his marker, the former Valencia man met Deulofeu's cross and steered a header past the static Alejandro Santome.

Barca's lead was doubled less than seven minutes after the restart thanks to the lively Deulofeu, who won back possession outside the Murcia half, drove into the box and slotted a good finish beneath Santome from a tight angle.

1 - For the first time Gerard Deulofeu has scored & assisted both in a single game on the Spanish Top Flight (all competitions). Key October 24, 2017

Barely three minutes later and the tie was effectively killed off thanks to Arnaiz's moment of brilliance. The former Real Valladolid man cut inside from the left and fired right-footed past the helpless keeper and into the bottom-right corner from the edge of the area.

Jasper Cillessen denied Chamorro in the closing stages as Barca began to ease off and there was time enough for them to hand a debut to Marc Cucurella off the bench, with their quest to win the trophy for the fourth season in a row off to an encouraging start.