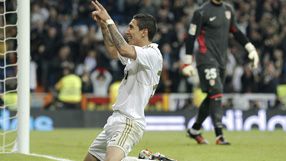 The pacy Argentine winger completed a 5-2 thrashing of the Champions League last-16 debutants with a delightful lob on Wednesday and he should be firing on all cylinders by the time they meet Bayern Munich in the semi-finals later this month.

Di Maria is still one of the side's highest providers of assists despite having sidelined with a string of niggling muscle injuries since the turn of the year and he has only started 12 league games and three in the Champions League.

"I suffered a lot after having a relapse on my injury and it has been very tough." Di Maria told reporters after coming on as a substitute to play a lively 35 minutes.

"I thought it was the end of the season for me but I am back in time for the most important games."

Kaka and Jose Callejon also netted on Wednesday, as did ever-present leading scorer Cristiano Ronaldo, who bagged a brace, and Mourinho was able to rest regulars such as striker Karim Benzema and midfielders Xabi Alonso and Mesut Ozil.

The former Chelsea and Inter Milan boss appears to have most of his multi-million euro squad in prime condition for the final push and he has enviable options going forward.

His fearsome trio of Ronaldo, Higuain and Benzema have scored a total of 101 goals between them in all competitions this year.

"The competition in the squad is very good," said Kaka, one of the world's most expensive players who is not guaranteed a place in the starting XI.

"Obviously there are players who are decisive but our strength has been the group."