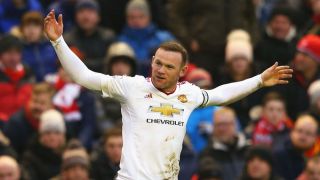 Wayne Rooney allowed himself a moment of self-indulgence after his late strike ensured Manchester United a smash-and-grab 1-0 win over Liverpool at Anfield on Sunday.

Rooney struck 12 minutes from time to earn United a fourth consecutive success over their fierce rivals, scoring his first goal at Anfield since January 2005.

Rooney also set a new record for the most goals for a single club in Premier League history with 176, edging ahead of former Arsenal striker Thierry Henry.

"It's great obviously to have records but I don't think that will beat the feeling I have now," Rooney told Sky Sports.

"To score the winner at Anfield, 10 years since I last scored... I'll be a bit selfish and enjoy that one "

"Everyone knows the importance of the game and that's regardless of league positions. We could be first, second, bottom or second-bottom - it's a massive game.

"It's a great victory and three points we needed to continue our start to this year, it's a massive win for us."

Goalkeeper David de Gea was required to make a string of fine saves before Rooney turned in the winner following Marouane Fellaini's header against the crossbar.

"They had chances but we defended well and scored a fantastic goal," the Spaniard added.

"I hope the victory gives us confidence and hopefully we can win a few in a row."