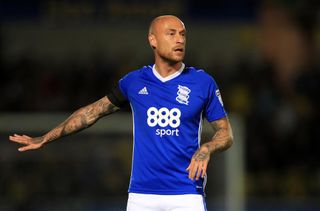 “When I have a bad day I remind myself it’s just a bad day, not a bad life,” says David Cotterill.

The former Wales international still has dark thoughts but is determined to help others into the light.

There’s a remarkable honesty and clarity around Cotterill as he speaks about his own battles with alcohol and mental health problems.

He retired last year aged just 30 but after setting up the David Cotterill Foundation has found a new purpose.

The winger still struggles – he did on Monday – and particularly after he spent three weeks at the Sporting Chance Clinic in April for alcohol dependency.

But with the bad days comes a sense of perspective.

He told Press Association Sport: “Monday was a horrific day but I went to an AA meeting because they help me.

“Previously, the second day I came out of rehab I was through the roof, it was one of the worst days of my life.

“I ran down to a beach and was having some kind of panic attack and having all these bad feelings, feelings of suicide. This came from nowhere.

“I thought, ‘I’m 31 years old, I’m retired, I’ve just come out of rehab and potentially could lose everything’ and it all got on top of me.

“It was mad, a panic attack and I couldn’t move for three hours, I just sat on the beach.

“My wife (Tanika) FaceTimed me, she was in Windsor and I was in Cardiff and she walked me through every step of getting to my car. I was in real trouble.

“As soon as that day passed I was like new, inspired and wanting to help people.”

It is because of his battle the candid Cotterill wants to help.

The Foundation hosted its first Mental Health Anonymous meeting in Cardiff on Wednesday, something the 31-year-old was nervous about but not only is it therapy for him, he knows the good it will do others.

The first @_DCFoundation mental health anonymous meeting held tonight. So inspiring and so brave from the people who turned up and shared there stories. Thank you Mr Coffi for allowing us to use your shop for this meeting ❤️ pic.twitter.com/mRq8ZESW5Q— David Cotterill (@cotterill_david) May 22, 2019

“I think it’s fairly unique,” said Cotterill, who attends AA meetings up to three times a week. “You can go and just listen, there are times I go to AA meetings and I just sit and listen.

“Being there shows bravery and that you are coming to terms with the issues you’re dealing with.

“No one will be judging anyone. We’re not going to cure people overnight, it’s putting something in place where they can talk and be comfortable.”

So far they have also provided kit to three clubs and Cotterill has been invited to Monday’s Sky Bet Championship play-off final by mental health charity Mind.

The Foundation aims to cater for anyone, not just those within sport, and is less than six weeks old but already has interest from Swansea, Newport and the Football Association of Wales.

“If you’ve helped one person you’ve done enough. We’ve done a better job than sitting there and doing nothing,” says Cotterill.

“I wanted to give people a voice who aren’t necessarily in the limelight. A local person, in any job, isn’t going to be in the newspaper because they’re not a celebrity or an athlete. I’m just trying to provide the care everyone needs.

“My ultimate ambition is to have these workshops worldwide to help as many people as possible. Eventually I want my own rehab place with therapists and counsellors.”

Cotterill is already going global having spoken in America and he has an invitation to talk in India, where he finished his career with ATK in the country’s Super League last year.

It came after he left Birmingham in 2017 following a successful three-and-a-half-year spell at St Andrew’s.

He made 429 career appearances for eight clubs, including Swansea, Sheffield United and Bristol City, and earned 24 caps for Wales, scoring twice, but playing masked the pain.

“When I was playing I would always get drunk and tried committing suicide two or three times,” said Cotterill, who played with Lego to distract himself during Euro 2016 with Wales.

“My wife would wake me in the morning crying and upset. It takes its toll, it’s not nice for the people you love.

“I had to stop drinking because I don’t want to put her in that situation again.

“It was getting to a stage where I’d be walking over to talk a corner and I’d be thinking, ‘I can’t wait to get to a nightclub and get drunk’. That’s all I’d think about and realised it was time to hang the boots up.”

The PFA have recorded a huge increase in the number of calls they are receiving from footballers struggling with mental health problems – a sign that the stigma attached to them may be disappearing.— PFA | Professional Footballers' Association (@PFA) May 16, 2019

Cotterill will never return to playing, and while he believes the stigma from mental health is fading, it remains in the game.

“I’m not afraid to ask for help any more, before I was stuck in my shell and let my ego take over,” he said.

“Things are going in the right direction, the BBC programme with Prince William, Peter Crouch and Danny Rose was good. If people like them have a voice then it will help a lot. There’s a really long way to go.

“I still don’t think every manager would play a player if they said, ‘I’m suffering from mental health issues but I still want to play because that’s the only time I feel free’. We’re not at that level.

“You just look at the FAW, there’s great people there and things are improving but their manager (Gary Speed) suffered mental health problems and took his own life eight years ago.

“Only recently have things started to be done. It’s taken eight years to provide that service – it needs to be acted on straight away. Think of how many lives can be saved.

“Prevention is better than cure but things happen and it’s, ‘oh right, we’d better cover this base’ to say we’ve covered mental health rather than being proactive.”