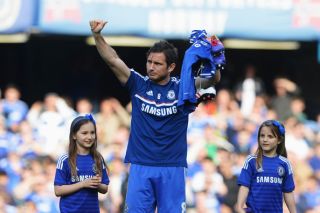 Lampard's departure from Stamford Bridge was confirmed on Sunday with the midfielder expected to join new MLS club New York City but Redknapp reckons the 35-year-old still has plenty to offer in the Premier League.

Redknapp, who led QPR back into the Premier League last season, cannot believe Chelsea have let the veteran go and offered to sign Lampard on loan at Loftus Road if he needs game time before New York City begin playing in the 2015 MLS season.

"He (Lampard) is easily good enough to do another year at Chelsea but I don't think Frank would be happy if he wasn't playing regularly because he is not used to that," Redknapp said.

"If I was Chelsea manager, I would take him back for another year, absolutely. He's still worth his weight in gold around the place and Roy Hodgson feels the same as far as England are concerned.

"You need good characters around, whether it's a football club or the England dressing room. His set piece delivery is still the best in the business.

"If he goes to New York, and their season does not start until March, you never know... if he's got six months to fill, maybe he fancies a game at QPR."

If the Englishman joins New York City, he will join Spain international David Villa in signing for the expansion franchise, which is owned by the New York Yankees and Manchester City.

"When you read about David Villa saying he's been made a mind-blowing offer to go over there, the money must be fantastic," Redknapp said.

"That new club in New York is owned by Sheikh Mansour, so everything about the club will be fantastic... I wonder if they are looking for a manager."