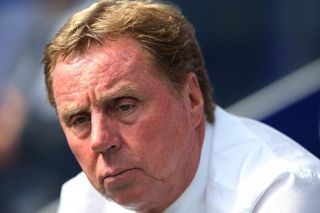 Former Cardiff City boss Mackay is alleged to have exchanged derogatory texts with head of recruitment Iain Moody during their time at the Welsh club, with the Football Association confirming on Thursday that an investigation is under way.

The publication of the messages in question have ended Mackay's chances of taking the vacant managerial role at Crystal Palace, where he was set for a reunion with Moody, who was director of football at Selhurst Park before he resigned on Thursday.

But while he accepts Mackay is in the wrong, QPR boss Redknapp has warned against an overly-zealous reaction to the accusations aimed at the 42-year-old.

"Malky Mackay has made a big mistake," he said in a press conference on Friday. "I don't know the other lad [Moody] but obviously what they've done is not right.

"Malky is a fantastic lad, a great fella, a family man, a real football man. He's made a mistake, people make mistakes. Suddenly everyone's an angel.

"It shouldn't finish his life should it? He's a young man with a big future, no-one's suffered like he and his family.

"I'm not condoning it, it's wrong if he's done what he's alleged to have done. But show me someone who's never made a mistake and I'll show you a liar.

"He's not a murderer, he's not a rapist and he's not a paedophile. It shouldn't finish his life.

"People get second chances in life. He's made a mistake but we're not going to hang him for it are we? Hopefully he'll learn from what he's done."