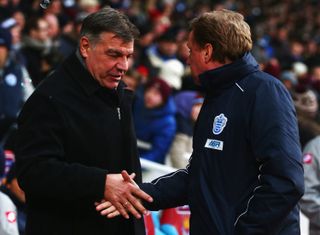 Sam Allardyce is under pressure at Upton Park, with the London club languishing in the Premier League relegation zone.

Injury-hit West Ham were also dumped out of the FA Cup at the first hurdle with a humiliating 5-0 defeat at Championship side Nottingham Forest on Sunday.

Redknapp has been installed as the favourite to replace Allardyce with British bookmakers, but the 66-year-old has played down the likelihood of returning for a second spell as West Ham boss.

He told getwestlondon.co.uk: "I don't know where they get their stupid odds from. I wouldn't take 33/1!

"They (West Ham) have got a good manager in Sam, so I don't see that happening. I'm very happy managing QPR and lucky to be at such a good club."

Allardyce met West Ham co-owners David Sullivan and David Gold and vice-chairman Karren Brady last week, but he denied he had been summoned for crisis talks.

Sullivan and Gold have since given him their backing in a lengthy open letter published on the club's website on Monday.

In the letter, they acknowledged the "seriousness of our current predicament" but urged supporters to stick behind Allardyce and his team.

"We know Sam has not lost his ambition or desire and is committed to making West Ham United a great Premier League Club," it continued.

The former Blackburn Rovers boss has had a host of injuries to contend with and he dipped into the transfer market to sign Wolves defender Roger Johnson on loan for the rest of the season on Monday, with more new arrivals expected before the end of the transfer window.