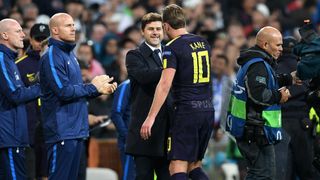 Forget Harry Kane, Mauricio Pochettino is good enough to move to Real Madrid according to Jamie Redknapp, who believes the Tottenham boss could manage any club in the world.

England star Kane has been linked with Madrid but former Spurs midfielder Redknapp said Pochettino – who guided the club to second place in the Premier League last season – could swap London for the Spanish capital as he continues to impress.

"Everyone's talking about him. He's up there with the best. He could manage any club in the world make no mistake. Tottenham are very, very lucky to have him," Redknapp told Sky Sports.

"They have one of the best managers in terms of his development of players; he improves footballers and also tactically he's as good as anyone.

"You want to look after him. People are talking about Harry Kane maybe going to Real Madrid, but maybe someone like him as well, unless he gets looked after.

"I'm sure we'll be talking about him in the same terms. He already is, probably."

Tottenham are level with Madrid atop Group H after three matches, while the Londoners are third in the Premier League as they prepare to host Liverpool on Sunday.