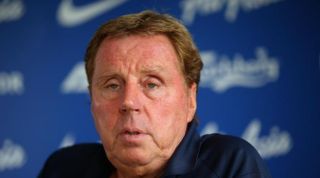 Redknapp was seething after the Premier League outfit were knocked out of the competition by Gary Rowett's League Two side.

And it was not just the defeat that infuriated Redknapp, but the manner of his side's performance.

Redknapp made 10 changes to his side and saw Junior Hoilett hit the crossbar in the first half but Adam McGurk's superb 77th-minute free-kick proved enough for the impressive Burton.

"We were poor. Really, really poor. You've got to have quality in any competition and we didn't have any tonight.

"Fair play to Burton, they were excellent.

"[But] I gave players an opportunity tonight hoping they would take it but they just didn't deliver.

"I picked a strong team tonight with plenty of experience on paper. But it wasn't a good team because we didn't turn up.

"Plenty of players were poor and didn't take the opportunity we gave them tonight.

Redknapp is likely to heavily rotate again ahead of his side's Premier League home clash against Sunderland on Saturday.

QPR have lost both of their top-flight matches this term and sit bottom in the table.