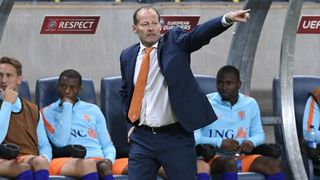 Netherlands coach Danny Blind was left furious after a controversial decision by referee Daniele Orsato to disallow a late goal for his side in a 1-1 draw in Sweden.

But Orsato disallowed the goal for a push by Dost on defender Victor Lindelof, a decision Blind slammed as an "incredible mistake".

"The referee was in the way," Blind told NOS after his team's Group A opener.

"I thought he officiated very well, but this is an incredible mistake by him.

Blind's men had plenty of chances to wrap up the points before the referee's intervention, with Davy Klaassen particularly wasteful in front of goal, and Blind felt his team did enough to win.

"If we win1-3 or 1-4 like that it is a normal outcome," said Blind, who reiterated he will not resign from his role ahead of the match.

"Before the 1-0 we had all of the game. They have had hardly any chances."

Netherlands face Belarus and France in a double-header at home in October's international break.