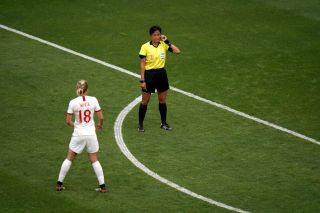 Head of FIFA’s refereeing department Massimo Busacca accepts the Video Assistant Referee system will “never be perfect” – but believes it has made a positive impact at the Women’s World Cup.

Officials at the showpiece tournament in France have found themselves under the spotlight following the implementation of rule changes on June 1 agreed by law makers the International Football Association.

There has been much debate over the interpretations of the new wording over handball and concerns the position of the hand/arm making a player’s “body unnaturally bigger”, as well as the time taken for a VAR review to be concluded.

In a lengthy presentation at the Parc des Princes on Wednesday, chairman of FIFA’s refereeing committee Pierluigi Collina had expressed his surprise at the VAR coming under the media spotlight given how much information was distributed ahead of the tournament.

“We see the VAR as something which can not be something wrong any more on interpretation, but tell me which team in this World Cup was perfect until now?” he said at a press conference broadcast on the FIFA website.

“How many hours did they spend to prepare themselves and arrive ready, but no-one was perfect. For us it is the same – we are trying to do our best to reduce mistakes, but remember we will never eliminate.

“It is your interpretation, but believe me in this competition we can see many of these situations and no one can be argued that it is a scandal, that something was not working.”

Busacca added: “It is an interpretation and we can discuss it after the game, you can have your opinion and I can have mine.

“We can never be perfect. No one coach and no one team is perfect. Mistakes is part of sports and we have to accept (that).

“(With) VAR, we have reduced (mistakes), the percentage is 98 (correct), so welcome the two per cent – we are not perfect, what is the problem? What is wrong? It is impossible, believe me.”

FIFA’s statistics from the first 44 matches of the Women’s World Cup showed a total of 441 incidents had been checked by VAR, with 29 reviews.

There were 22 on-field reviews made by the match referee, with 18 changed. FIFA stated the overall VAR accuracy was 98.18 per cent.

Collina also accepted how referees viewed each incident will always be “subjective opinion.”

Collina had earlier reflected on the changes to when the assistant referee raises an offside flag, which allows play to continue before a VAR review and possible decision correction – as happened with Ellen White’s goal for England in their controversial last-16 win over Cameroon in Valenciennes.

During questions from the floor, the former referee, though, rejected suggestions VAR had favoured European teams.

The Italian had presented different pictures via his own mobile phone of the ball on the touchline during the build-up to Holland’s late penalty against Japan on Tuesday night, when VAR checks had been made whether it was out of play.

Collina felt the new rules had helped goalkeepers when facing penalties – with the old laws making it “almost impossible” for them to make a save while having both feet on the line.

According to the Italian, the IFAB changes make every such measurable decision a matter of fact.

“We had goalline technology which was accepted by the world – if the ball is over the line, it is not a big goal or a small goal, it is a goal, it is a fact.

“There is no room for any discussion – we have to enforce what is written in the laws of the game.”