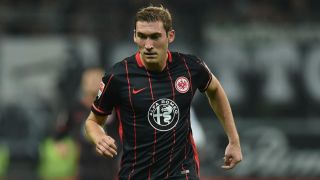 Eintracht Frankfurt defender Stefan Reinartz has retired from football at the age of 27, citing a spate of injuries as the cause.

The former Bayer Leverkusen player confirmed in a statement that after enduring another injury-disrupted campaign he is stepping away from playing.

Reinartz started just 14 games in the Bundesliga for Frankfurt last season, with his final appearance for the team, who secured Bundesliga survival thanks to a play-off win against Nurnberg, coming in March.

"My past three years as a footballer were marked by many injuries and thereby also of disappointment," Reinartz said.

"The finitude of a football career was always clear to me. I was made ​​aware that my physical wear accelerated after seven and a half years in professional football."

Reinartz, who won three caps for Germany, added that the decision was "very difficult", but he intends to continue working in football.

"The whole thing is very difficult for me," he said. "I am aware that I will be without many things and yet the decision feels to be correct. I'll definitely stay connected to football."