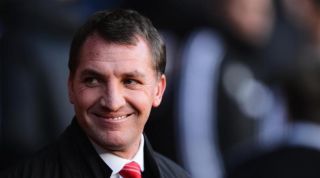 The Merseyside club, who face second-placed Chelsea at Anfield on Sunday, can guarantee a first domestic crown since 1990 by winning their remaining three games.

With Chelsea five points behind and Manchester City a further point adrift, albeit with a game in hand, Liverpool are now strong favourites to finish top of the pile.

Yet Rodgers believes his side can still operate under much less pressure than their rivals, after exceeding all expectations by charging to the Premier League summit.

Asked whether not winning the league from Liverpool's current position would represent failure, he replied: "No, not at all.

"Whatever happens with us, we will have had a brilliant season.

"I would be lying if I said I thought at the start of season we could be top of the table at this stage.

"Pressure? That's what they have at Man City and Chelsea, where they are expected to win the league.

"I'm enjoying being top of the league. I have never slept better!"

The build-up to Liverpool's meeting with Chelsea has been dominated by speculation over the latter's prospective team selection.

Chelsea manager Jose Mourinho has suggested he is likely to field a weakened line-up at Anfield, with his side facing a crucial UEFA Champions League semi-final second-leg tie against Atletico Madrid just three days later.

Yet Rodgers does not believe Mourinho has given up hope on overhauling Liverpool in the title race.

The Northern Irishman added: "Whatever team Chelsea put out (on Sunday), it will cost more than ours and be more experienced than ours.

"Jose's a winner - he won't give up. He knows me well enough to know it (his comments in the lead-up to the game) wouldn't bother me one iota."