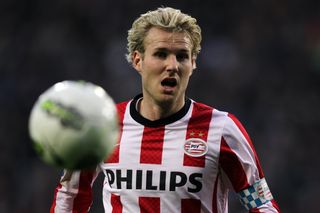 The 27-year-old joined the Dutch side in 2009 from Malmo, and became an integral part of the first-team set-up at the Philips Stadion.

Toivonen collected the KNVB Beker in 2012, and has featured in the UEFA Champions League and Europa League for PSV.

But the Sweden international has been on the periphery of Philip Coco's plans this term, starting just six Eredivisie matches and making a further seven appearances from the substitutes' bench.

PSV had hoped to retain Toivonen's services, but he has decided to follow in the footsteps of fellow Sweden internationals Kim Kallstrom, Andreas Isaksson and Erik Edman, who have all donned the Rennes jersey.

A statement on the club's official website read: "Looking for an attacking reinforcement, Stade Rennais FC have recruited for three and a half years Swedish striker Ola Toivonen.

"He previously played at PSV Eindhoven since 2009. At ease in the passing game and skillful in front of goal, Toivonen has a different and complementary (approach) to other attackers (at) Rennes."

Rennes will hope Toivonen can add attacking spark to a side that has scored just 22 goals in 21 matches this season.

Philippe Montanier's charges will be keen to put distance between themselves and the relegation zone, with Rennes currently 15th in Ligue 1, six points above Valenciennes in 18th.